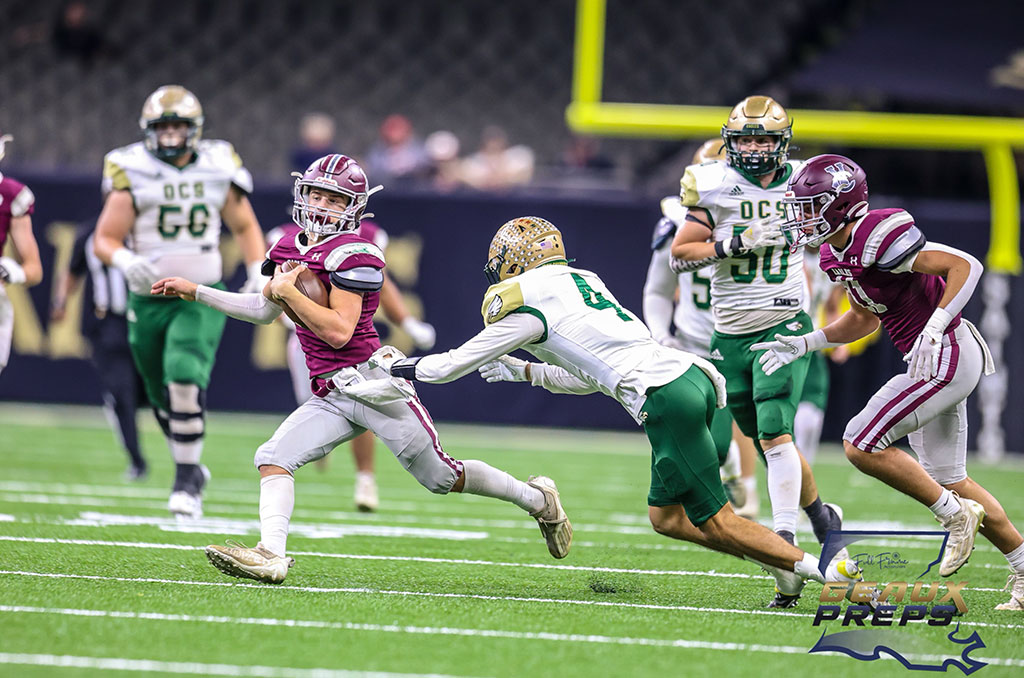 But, a dedicated offseason later, and Hogan was walking off the Caesars Superdome field with two interceptions and an Outstanding Player trophy to go with his Eagles’ Division-IV select state championship, their first since 2019.

“Last year I sucked at DB,” the 6-foot-2, 180-pound senior smiled after the 28-14 defeat of top-seeded Vermilion Catholic. “I’m not even gonna lie to you. I was slow, ran a 4.9(-second 40-yard dash) and wasn’t moving really well. I just played receiver behind Tristan. But this year I knew I had to take a step forward. I ran track and got by 40 down to a 4.5. And coach Fitzhugh put me through a lot of footwork drills that helped my DB skills and really helped me become a DB.”

Hogan hauled in six catches for 80 yards as a go-to receiver for senior quarterback Landon Graves, including a contested third-and-10 catch to extend the offense’s first possession and help set up the game’s first score.

He snatched an over-the-shoulder interception in the final minutes of the first half, then jumped a pass for a leaping pick in the final seconds of the third quarter to start tightening the grip on the victory.

“The second one I picked off, (Fitzhugh) might get on me in film for this, but I saw him throw it and just jumped it,” Hogan smiled. “I thought it was the right thing to do, which he could’ve thrown it to the other guy that was really my guy. But I just jumped it. And I just thank God for giving me the ability to play football at this level. And he coaches me well every day as a DB coach, and I’m just grateful for that.”

Hogan’s interceptions helped the Eagles win the turnover battle by three and the game by 14 points.

“In every playoff game, we had at least three takeaways, and last week we had five. When you hustle to the football, good things happen.”

Fitzhugh repeatedly praised the players for their buy-in and work.

And Hogan and his teammates repeatedly turned the credit back toward their coaches.

“He’s just done a lot for me, man — he really has,” the senior said when asked how quickly he thought of his offseason work with Fitzhugh as he received his Outstanding Player trophy. “They come right to mind. I mean, how could they not. And you’ve got to think, those are your brothers you’re playing with on the field. And you think of every single memory, every single game. And it’s a happy thing because we won, but it’s sad because we don’t get see our brothers together every single day anymore.

“Football season is the best part of the school year because we get to see our brothers and our great coaches. And they all come right to mind any time you’re getting a trophy or winning anything.”