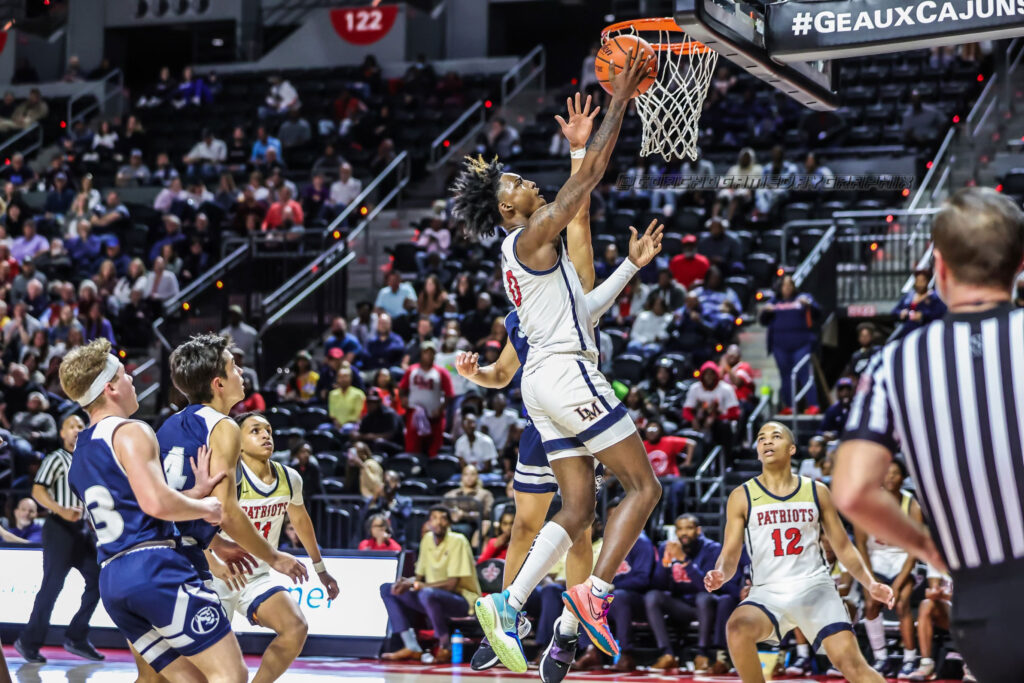 LAFAYETTE – The first day of the LHSAA Select Boys Basketball Championships provided excitement and history-making moments inside the Cajundome.

Family Christian gets a chance at redemption on Saturday when it returns to the Divison V state title game for a rematch with Jehovah-Jireh.

The Flames used double-digit scoring from four of its players, highlighted by Bryson Martin’s 22-point campaign. Chance Martin added six points as well as two assists and six points on the evening.

For St. Joseph’s, Jaquavon Scaberry led the team with 18 points and seven rebounds.

Jehovah-Jireh is headed back to the state championship finale following a 54-39 victory over Episcpal of Acadiana.

J.P. Ricks had an outstanding performance with 30 points along with five rebounds, seven assists and five steals on the afternoon. Michael Bougere finished with 10 points and two assists for the Warriors.

ESA was led by Alex Koval who scored 10 points and grabbed nine boards.

Southern Lab has not won a state title since the 2005 season but the Kittens are hoping to change their luck Saturday.

The team received a huge momentum booster in a semifinal round win over Hamilton Christian with a last-second shot from beyond the arc.

Calvary Baptist will seek its own redemption Saturday when it gets another chance at basketball championship gold.

The Cavaliers are back in the finals for a second straight year after defeating Country Day, 58-50, Wednesday night.

Martin McDowell was explosive with 17 points, going 5 of 6 from the three-point line. Kameron Kennon (15) and Malaki Thomas (12) each finished in double-digit scoring.

Country Day had three players finish with 10 or more points and were led by Jordan Trahan’s 14-point outing.

For the first time since 2017, St. Thomas More will not be playing for a state championship as Liberty Magnet upended the four-time defending champion, 47-43, in the Division II semifinal round.

It was free-throws that aided Liberty who was 15-of-19 in the second half despite only shooting 27% from the floor.

The Patriots used a 20-point effort from Jacob Wilson, who also added seven steals, five rebounds and two assists to his stat sheet. Cameron Newman finished with 12 points on the night.

Archbishop Hannan made school history Wednesday night with a 53-40 win over St. Michael to advance to the state title game for the first time.

Hannan was led by Drew Timmons who scored 17 points along with four rebounds and two assists. Grant Kemp added six points and seven assists as well as two steals.

For St. Michael’s, three players finished in double-digit scoring, including Anthony Igiede (16 points, 11 rebounds. who led the team with a double-double.

No. 2 Episcopal vs. No. 3 Lafayette Christian

No. 2 Archbishop Shaw vs. No. 3 Scotlandville