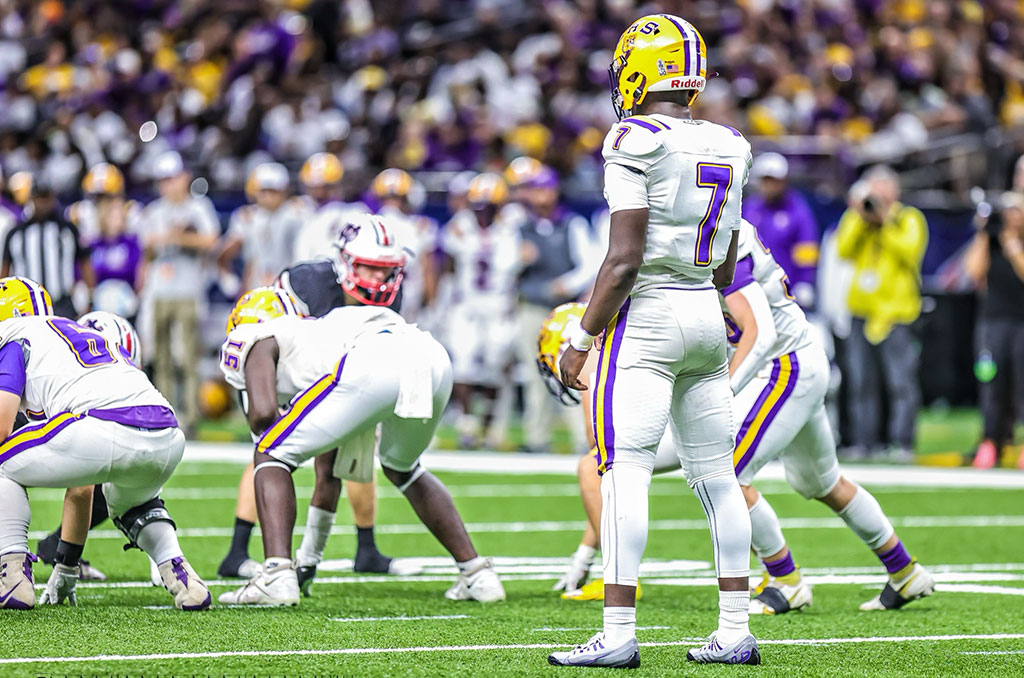 NEW ORLEANS – Lutcher’s dream at winning the school’s ninth state championship came true Saturday afternoon inside the Caesar’s Superdome as the Bulldogs used a second half surge to come from behind and defeat North DeSoto, 28-25, in the Non-Select Divison II title game.

The victory gives Lutcher head coach Dwain Jenkins his second state title and improved the Bulldogs to a 14-1 mark to close the season. North DeSoto dropped to 12-2 on the year after making it to the state championship for the first time in school history.

Lutcher quarterback D’Wanye Winfield took home Most Outstanding Player honors for his efforts in helping the Bulldogs come from 13 points down to take home the hardware. Winfield three for 299 yards and three touchdowns while gaining 130 yards and scoring a touchdown on the ground. Winfield was responsible for all four of Lutcher’s touchdowns on Saturday including a 50-yard touchdown pass to give the Bulldogs a 21-19 lead in the fourth quarter. Tylin Johnson finished with 141 yards and two touchdown receptions while Kai Brown led the defense with seven tackles.

North DeSoto’s defensive back Hunter Addison was named Most Outstanding Player for his efforts on the defensive side of the ball. Addison finished with 16 total tackles, a sack, a forced fumble and a tackles for loss. Freshman quarterback Luke Delafield was 23-of-39 for 320 yards and two touchdowns while Chris Falls caught two touchdowns for 94 yards.

• 2:02 – LUTCHER | The Bulldogs capped an impressive drive with a 25-yard touchdown pass from D’Wanye Winfield to Dameium Marcell to tie the game up following a couple of empty drives.

• 8:52 – NORTH DESOTO | Griffins regained the lead with a 22-yard Brian Banks touchdown reception from Delafield but a missed extra point only stretched the lead to six.

• 8:52 – NORTH DESOTO | Marques Hampton punched in a touchdown at the goal line to extend the North DeSoto lead, 19-7, as the Griffins’ failed to convert the two-point attempt.

• 5:27 – LUTCHER | Winfield capped an eight play, 64-yard drive with a 5-yard touchdown run to bring the Bulldogs to within five points of the North DeSoto lead.

• 11:53 – LUTCHER | A 50-yard bomb from Winfield to Tyler Johnson gives the Bulldogs their first lead of the game as they go up 21-19 to start the final period.

• 7:48 – LUTCHER | Winfield again connected with Johnson for a 25-yard reception to extend the lead to a 28-19 score over the Griffins.

• 0:00 – NORTH DESOTO | The Griffins scored as time expired to cut the lead down to three points following a touchdown pass from Delafield to Falls from five yards out.