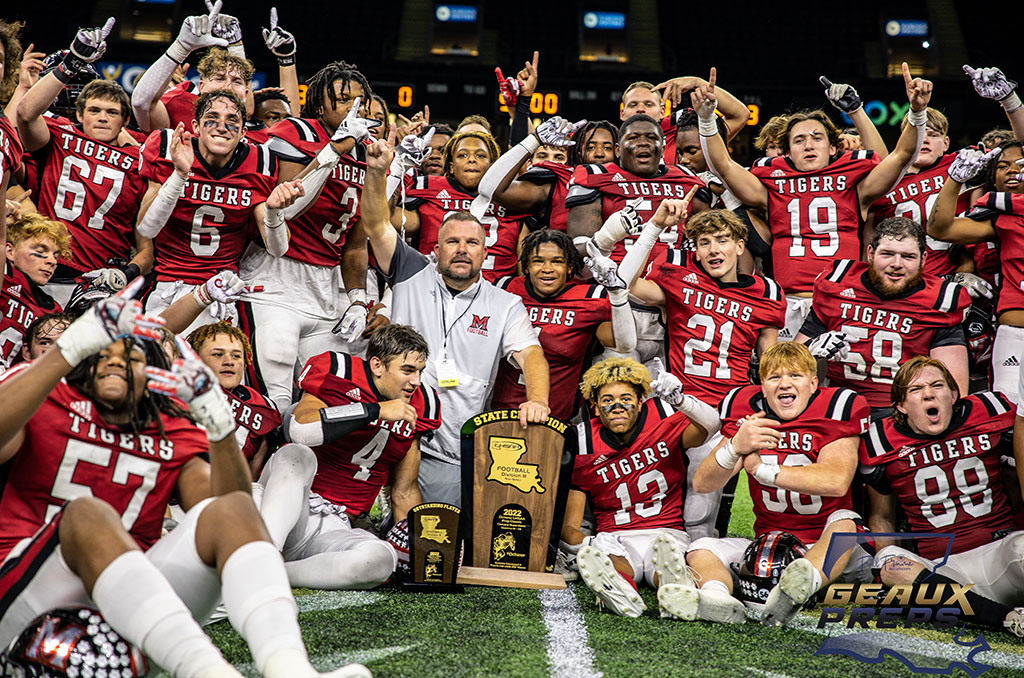 NEW ORLEANS – In one of the most anticipated championship matchups of the weekend, Many redeemed a loss in last year’s state title game with a 35-13 smashing of Union Parish Saturday night to take home the Non-Select Division III state championship.

The Tigers notched their second championship in four seasons with the win and finished undefeated at 13-0. The title win is Jess Curtis’ third as the head coach at Many.

The loss dropped Union Parish to 12-2 overall on the season and snapped a 10-game win streak dating back to the fourth week of the regular season.

Many quarterback Tackett Curtis was named the game’s Most Outstanding Player for Many after accounting for 108 total yards of offense and two touchdowns while adding seven tackles on defense. Tailback Jeremiah James rushed for 140 yards and two touchdowns in the game while Trenton Williams added 102 yards on the ground as well as a touchdown.

For Union Parish, senior tailback Trey Holly was named Most Outstanding Player with 115 yards rushing as well as a touchdown. In all, Holly totaled 156 all-purpose yards in the game. Jy’Marion Island added the Farmers only other touchdown and finished with 53 yards rushing. Tyquereis Wilson led the Union defense with eight tackles and a forced fumble while Cameron Hill totaled eight tackles as well.

• 0:32 – MANY | Tackett Curtis broke loose for an 80-yard rush to put the Tigers on the board first near the closing seconds of the first period.

• 0:13 – UNION | The Farmers responded on the next drive as Trey Holly slipped through the middle and was off to the races on a 62-yard scamper to tie the game at 7-7.

• 0:13 – MANY | Trent Williams capped another Many drive with a 12-yard rush in for paydirt to regain a six point lead following a missed extra point.

• 4:59 – MANY | Jeremiah James increased the Many lead on a rush from two yards out followed by a two-point conversion to make it a 21-7 score.

• 7:09 – MANY | Curtis scored on his second rushing touchdown of the day to put the Tigers up by 15 near the middle of the final quarter.