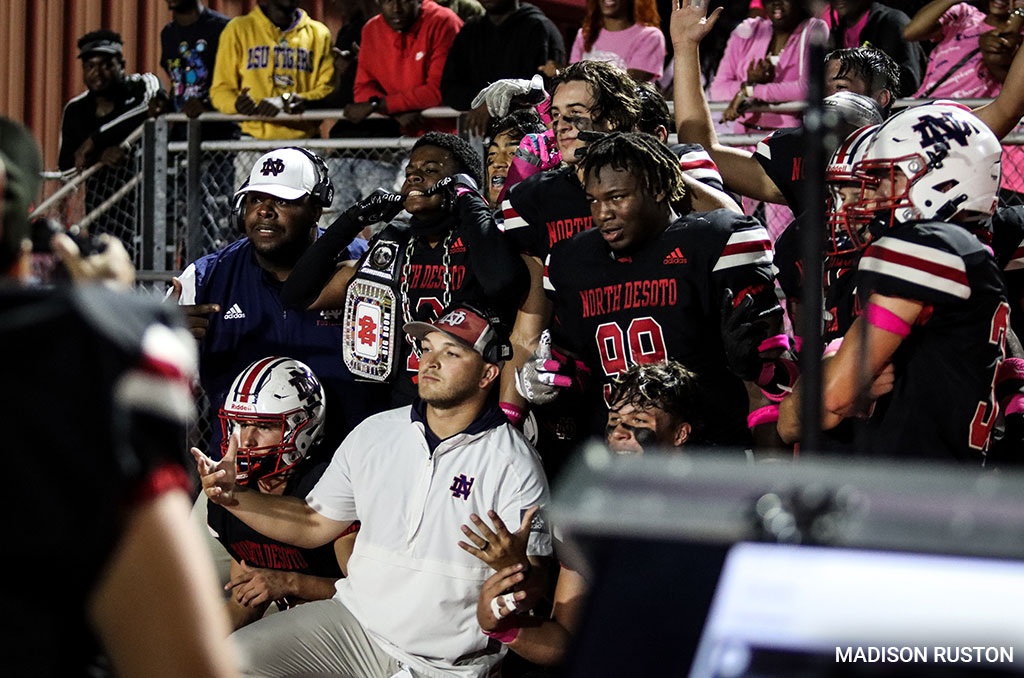 Defense wins championships. That statement may very well be the case for what’s going on in Stonewall.

Everyone’s heard the talk of North DeSoto’s high-powered offense being led by the freshman sensation, Luke Delafield, at quarterback, but the unit that may be getting overlooked is the dominant performance of the defense.

With 39 total turnovers on the season and only 14 points per game allowed, it’s not an easy task for opposing offenses to go up against.

Defensive coach Josh James says there’s no one unit to give credit to for all the success. Every position does its part.

“There are so many “keys” to our defense,” said James. “I’ll start with our defensive line. Upfront we have Marques Hampton, Jordan Milton, Jaxon Terry, and Dominic Smith, who are all ready to go at the drop of a hat. Their will to win and their refusal to be denied is what drives this defense. A huge key this year has been controlling the line of scrimmage every game, and that starts with those four.”

Those linemen make it a nightmare for the opposing quarterback and running back all night. From sacks to forcing fumbles, they can do it all. And if they get their hands on one of those fumbles, they’ve all but shown they can find the endzone, with a scoop and score.

“The secondary, we are led by two seniors, Hunter Addison and DJ Collins accompanied by two juniors Corbyn Cross and Lake Bates,” said James. “Those four guys are some of the smartest defensive backs I have ever been around, which opens us up to do a lot of stuff defensively.”

Cross (5) and Bates (4) lead the team in interceptions forcing opposing quarterbacks to think carefully of their next delviery.

Coach James had a lot of good things to say about one of the key senior leaders on the team, linebacker Daniel Olivier.

Olivier says being underestimated by his size is all the motivation he needs.

“Being undersized takes some grit. It takes the little things being right. Like being that one inch lower, having my eyes in the correct spot, lined up one more step inside, watching the film, it’s all the little things that need to happen for the big plays to take place.”

“I feel like this is one of the reasons why our defense plays as good as we do. Constantly doubting us does nothing but make us more excited to get better than we were yesterday,” said Olivier.

Coach James also feels the defense has been overlooked but is finally starting to turn some heads.

“I think we are slowly gaining the respect of other teams around the area. Looking back at the schedule, we held some really good programs such as Airline, who is leading 1-5A, to 21 points and also one of the higher rated teams in the area in Huntington to six points.”

“When it’s all said and done, respect isn’t given, it’s earned and I truly believe this defensive unit has bought into that and they want to prove they are the best around every Friday night,” James said.

With just two games left before playoffs start, the chance of a perfect regular season is in sight. However, Olivier says the Griffins aren’t looking to just go undefeated.

“10-0 would be huge but doesn’t put a ring on our finger. These past games we have proven a lot about what we can do, but there is still a lot of getting better that needs to happen. There is no room for satisfaction, it leads to nowhere.”

Coach James feels the Griffins are taking all the right steps to ensure that they’ll still be playing in December. It’s an “iron sharpens iron” mentality in Stonewall.

With an iron sharpens iron mentality, neither side of the ball is ever “losing” during practice.

“When you go against an explosive offense or a physical defense every day, you’re going to get better, and that’s just the situation we have been fortunate to have this year,” James said

The Griffins are looking to prove that defense really does win championships.