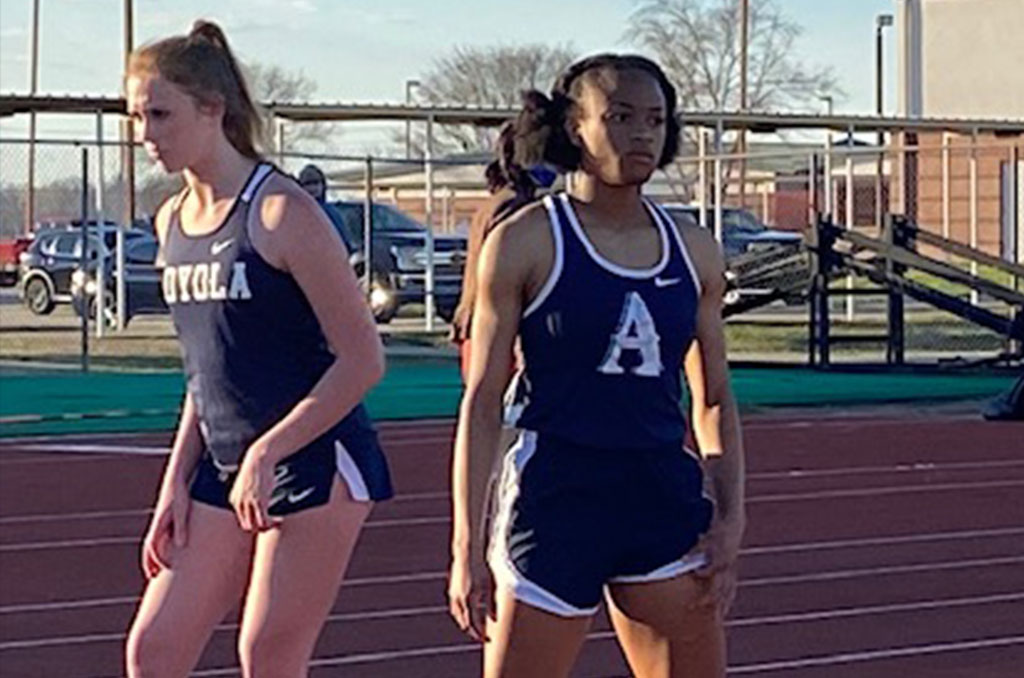 Airline junior Brianna Taylor had a smooth transition from the indoor track and field season to the outdoor season, winning the 100 and 200 meters at Benton’s Shamocus Patton Relays on Thursday, just 12 days after finishing second in the 60 meters at the LHSAA State Indoor Track & Field Meet in Baton Rouge.

In the finals of the state meet, there were no introductions needed. Taylor was one of four finalist from North Louisiana. Captain Shreve’s Karrington Stewart, Byrd’s Nicole Flowers, and Booker T. Washington’s Chyler Turner, who won the Division I 60 meter hurdle state championship just moments before the race, were all on the starting line. All sprinters have run against each other in years past–all the way back to middle school.

“It felt surreal,” Taylor said of her runner-up state meet performance. “I was just in shock of coming that close. As for the other three girls (from North Louisiana), I love them to pieces. I am so glad it was us that was able to represent northern Louisiana.”

John Curtis senior Raven Nunnery won the state championship in the event with a time of 7.61. Taylor’s time was 7.77.

While coming away from her outdoor opener with two gold medals, the Lady Viking junior is far from content.

Despite scoring 50 points with Russell and Willis alone, the Lady Tigers (123 points) were edged out by the North Desoto Lady Griffins (130 points).

“The work we have been putting in is starting to pay off,” North Desoto girls head coach Robert Manriquez said. “We had a really good indoor season. We had some student athletes qualify for the state indoor meet. They have been practicing all season. I’m liking what we are seeing. Hopefully, we can carry it on throughout the season.”

The Lady Griffins were led by Madi Pender, who won the 400 meters (1:03.96) and ran a leg on the Lady Griffins’ winning 3200 meter relay team. Other Lady Griffin winners included Molly Wiley in the pole vault, who jumped 7-6 and edged out teammate Randie Arinder on fewer misses.

In the boys division, the first place trophy will stay in the “track shed” at Benton High School. That is where last year’s meet trophy spent 2020 after being won–and left–after the first and last meet when the season was cut short due to covid.

While head coach Scott Reeder, who doubled as meet director, didn’t get to see much of the meet, he saw enough to be pleased with a few event groups.

“I was impressed with our hurdlers, our javelin thrower did good, our jumpers were spot on,” Reeder said, “of course Jacob in the distance events.”

Perhaps the biggest winner of the evening were all of the coaches and athletes who were leaving Tigers Stadium at 7:15pm thanks to the efficiency of Reeder and his Benton staff.

“Everything went smoothly today,” Reeder said. “Everybody did their job. It was organized with hurdle crews. There were a lot of assistant coaches who did a great job. Leaving the stadium at 7:15pm the first meet of the year…that’s unbelievable.”