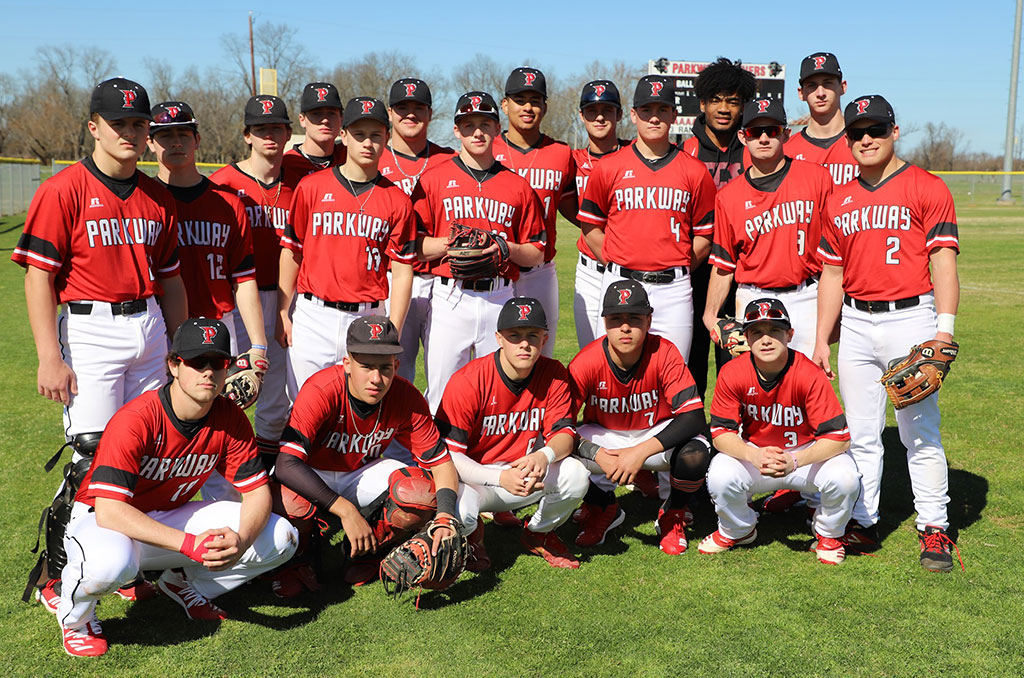 Benton and Byrd, the top two teams in the District 1-5A baseball standings, faced off in a big 2-game mid-week series with each team taking wins on its home fields. Benton took advantage of eight walks by Byrd pitchers in a 15-5 win. The Yellow Jackets responded with 11 hits and took advantage of six walks by Tiger pitching for a 9-5 win at The Hive.  Both secured close wins on Saturday, Benton defeated Captain Shreve 5-3 and Byrd held off Natchitoches Central 6-4. With its wins Benton is 21-4 overall and 8-1 in district with Byrd a game back at 7-2 in district, 19-4 overall. Haughton lurks in third at 6-3 in district and 22-5 overall. Byrd has moved up to the top spot in the Division I Power Rankings provided by GeauxPreps.com

Benton 15, Byrd 5 – The Tigers took advantage of eight walks, six in a 7-run fourth inning to get the win. Benton tied the game 5-5 on when Clint Lassiter led off the fourth with a home run. The Tigers took the lead for good with four consecutive walks, 6-5 and ended the scoring in the inning on a 2-run error for an 11-4 lead. Grayson Gates  was 3-for-4 with two doubles, Rylan Lawrence was 3-for-3 with 2 RBIs, Owen Wainscott was 2-for-2 with 3 RBIs and Lassiter had two hits the home run and 3 RBIs for Benton.

Byrd (17-4, 5-2) was led by Connor Pierce, Cole Joyner, and David Favrot who had two hits. Favrot had the only extra-base hit for the Jackets, a double.

Byrd 9, Benton 5 – The Yellow Jackets used a 4-run fourth inning and 3-run sixth to even the series. Jason Little, Connor Pierce and Sawyer Lacoste all  had run-scoring singles and Cole Joyner brought in a run with a sacrifice fly in the Jacket fourth inning that gave the hosts a 6-3 lead.  Brock Lambert, Brooks Brossette and David Favrot all had two hits for Byrd with Lambert driving in two runs and Favrot one. Lacoste got the win pitching 5 1/3 innings, allowing six hits, 5 runs, 3 earned and struck out 7.

Clint Lassiter was 2-for-3 with an RBI and Dane Stearns drove in two runs for the Tigers.

Byrd 6, Natchitoches Central 4 – At Byrd, the Yellow Jackets scored in each of the first three innings to take a 5-1 lead and held on for the win. Cole Joyner was 2-for-3 with a triple and Sawyer Lacoste also had a triple and an RBI. Kirk Martinson went 5 innings, allowing two hits, 2 runs, 1 earned and struck out 7  to get the win.

Connor Stokes was 2-for-3 and Matthew Dunn 2-for-4 for the Chiefs. Alex Dupey and Tyler Metoyer both had doubles as Natchitoches dropped to 13-16 overall and 3-6 in district.

Haughton 7, Captain Shreve 3 – Chan Lytle’s bases clearing triple highlighted a 5-run fifth inning as the Bucs rallied to defeat the Gators. Captain Shreve starter Jackson Bleigh took a 3-0 lead into the fifth on a Caden Akana sacrifice fly, his own infield single and an error. Hunter Chavis and Roman Tolbert both had a pair of hits for Haughton (21-4, 5-2) with Chavis and Peyton Stovall recording doubles.

Captain Shreve 16, Haughton 4 – At Haughton, the Gators exploded for a season-high in runs, scoring in all but one of the six innings. Leading a 16-hit parade was Blake Fant who finished 3-for-4 with a double and scored five times, Will Fielder was 2-for-3 with a double and 5 RBI, Korby Harrell 3-for-3 and 3 RBIs and Walker Wicklund 2-for-4.

Lytle had a double and Colin Rains was 2-for-2 for the Bucs.

Benton 5, Captain Shreve 3 – At Benton, the Tigers scored three runs with two outs in the sixth inning to come from behind for the win. Clint Lassiter singled home a run and the other two runs came in on a wild pitch. Lassiter and Brock Vanhoy were both 2-for-3 Benton.

Korbyn Harrell had two hits for Shreve, one a double.

Airline 4, Natchitoches 1 – The Vikings used a 3-run third inning to get past the Chiefs i n a 1-5A district game at Airline. Harrison Waxley was 2-for-3 with a triple, Mathew Scripture drove in two runs and Tyler Ferguson had the only other extra-base hit with a double. Carson Carey got the win with a complete-game 4-hitter, striking out 10 and walking three.

Natchitoches 13, Airline 9 – At Natchitoches, the Chiefs scored 11 runs in the fifth and sixth innings to get the district win. Baden Turlington was 2-for-4 with a home run and 3 RBIs and Connor Stokes drove in three runs.

Parkway 10, Airline 4 – At Airline, the Panthers tallied six runs in the eighth inning to prevail in a district 1-5A matchup. Brandon Levy was 4-for-4 with a double, and three Panthers finished 3-for-4 with Brady Norcross lead those with 3 RBIs.  Barrett Newman and Sean Waits were other two as Parkway pounded out 17 hits. Hunter Holder and Zach Schoenborn also had doubles for the Panthers.

Northwood 14, Minden 8 – At Northwood, the Falcons cruised past the Crimson Tide with a 15-hit attack. Cayne Little led the onslaught going 4-for-4 with two doubles and 3 RBIs.Tucker McCabe had three hits in four at bats and Hunter Womack, Brendan Burns and Hayden Phipps all had 2 hits. Womack had a double, Phipps drove in two runs as did Yancey Upchurch.  The win was the Falcons second in two District 1-4A games and improved their overall record to 8-17. North DeSoto is also 2-0 in district and 24-3 overall. Minden fell to 3-1, 13-7 with the loss.

Calvary 19, Plain Dealing 0 – The Cavs run-ruled the Lions in four innings as Drew Bickham didn’t allow a hit, walked one and struck out 10. Cade Bedgood and Fisher Nance both had two doubles with Bedgood driving in four runs and Nance 3.

Calvary 8, Loyola 3 – The Cavaliers’ Jackson Legg was 2-for-3 with a double and Cade Bedgood and Drew Bickham both drove in two runs to lead the way. Legg also got the win on the mound, going 6 1/3 innings, allowing six hits, walked five, gave up 3 earned runs and struck out 8. Caden Flowers also had a double for Calvary (16-6). Nathan Lirette and Sam Szwak were both 2-for-4 for Loyola.

Calvary 14, Claiborne Christian 3 – At West Monroe, the Cavaliers got four doubles and spread out 12 hits. Caden Flowers was 2-for-3 with a double and 3 RBIs, Drew Bickham 2-for-4 and Blaine Rogers 2-for-3. Cade Bedgood, Jackson Legg and Fisher Nance doubles as the Calvary improved to 18-6 on the season.

Bossier 2, Logansport 1 – The Bearkats came out on top in a pitchers duel as Coleman Beeson allowed 3 hits in six innings, and stuck out 11. Beeson had an inside-the-park homerun and was 2-for-2 at the plate.

Softball districts in the Northwest Louisiana region have all been decided and the regular season ends this week with playoff pairings announced Friday. Here are some results from the past week.

Airline 17, Haughton 5 – Raelin Chaffin struck out 14 in 6 1/3 innings, allowing five hits and 4 runs, 3 earned to get the victory in the circle. Jina Baffuto led the hit parade with four in five at bats, she scored three times. Elena Heng, Paris Endris, Paige Marshall and Allison Watson all had three hits on the day. Endris and Marshall both had doubles and Endris drove home a team-high 4 runs while Marshall and Watson both had 3 RBIs. With the win Haughton, 13-5 overall, finishes District 1-5A play 6-1 and tied for first with Natchitoches Central (18-7, 6-1)

Airline 5, Ouachita Christian 0 – Chaffin picked up another win in striking out 13. Allison Watson was 2-for-2 as the Vikings improved to 14-5 overall.

North DeSoto 12, Menard 11 – North DeSoto, the District 1-4A champions with a 7-0 record and 26-5 overall, used a 5-run sixth inning to counter a 5-run top of the fifth by Menard to defeat the visitors Friday. Orgeron Ciara was 3-for-4 with a double and two home runs and Cameron Curtis had a single and double in 4 at bats and drove in 4 runs.

Loyola 3, Anacoco 2 – At Loyola, Frank Cicero Field the Flyers had to go an extra inning for the win. Noble Means singled home John Shahrdar with the winning run in the eighth and got the compete-game win on the mound. He allowed 4 hits, walked four and struck out four. William Soignier was 3-for-3 and Means 2-for-4 at the plate.

Christina Gegg had a double for Benton in two at bats.

Logansport 10, Ebarb 1 – Alexis Bridges was 2-for-3 with a grand slam, Landry Atkins 2-for-3, 2 doubles and 3 RBIs for the Tigers. Katie Paul Woods struck out 13 in picking up the win in the circle.

Captain Shreve’s boys won its fourth track meet of the season Thursday in outdistancing North DeSoto 106-71 in the Huntington Raider Relays at Lee Hedges Stadium. Kendrick Law once again led the charges with individual first place finishes in the 100-meter dash (10.77), 200-meters (22.05) on the track he took the long jump with a season best 22 feet, 8 inches. He was also a member of the 400-meter relay team that posted a 42.01 first place finish.  Teammates Marquez Stevenson and Maurice Green were also contributors on the track and on the 400-relay team. Stevenson won the 400-meters in 49.77 and was second in the 200-meters with a 22.63. Green was third in the 400-meters with a time of 50.47.

North DeSoto had a double-winner on the track as Cole Palmer took both hurdle events, winning the 110-meters in 15.01 and the 300-meters with a 40.40. Jonathon Lewis was third in the 300 posting a 42.34 for the Griffins. In field events, Logan Ferguson and Palmer were 1-2 in the pole vault, with Palmer clearing 12-feet and Palmer 10-0.

Northwood had the only other double winner with Cameron Foster taking the weight events. He won the shot put with a toss of 49-2 and his 128-8 ½ effort in the discus outdistanced his nearest competitor.

Depth was the deciding factor in the girls division as North DeSoto had one first place finish and Huntington two but were 1-2 in the team standings, 85-82. Parkway was close behind scoring 77 points for third place.

Top finishers for the Lady Griffins included Molly Wiley and Randle Arinder who finished 1-2 in the pole vault. Wiley won with a 7-9 vault and Arinder was three inches behind a 7-6. Allison McAllen was second in the 3,200-meter run to Loyola’s Lauren Lindsey and Madison Pender was second to St. Mary’s Jensen Parker in the 800-meters.

Mikaylah Williams of Parkway had a pair of first place finishes in the field winning the discus with a 111-11 and tied for first in the high jump. She and Maggie Gilmore of St. Mary’s both cleared 5-0.

Shreve’s Fuller won the triple jump with a 35-9 ½ leap to go with her 16-7 second place finish in the long jump.

Byrd Principal Jerry Badgley has named Stacey Ballew as the next head football coach. Ballew has been on the Yellow Jacket staff off and on since 1998. He was a freshman coach for 1998-99 before moving up to coaching the running backs on the varsity in 2000. He left to coach in Texas for a year but returned has been at Byrd since 2002 and has been the defensive coordinator since 2009.

Northwood announced the appointment of Patrick Lindsey as its next boys basketball coach. Lindsey moves from being the Lady Falcons coach since 2016 where he resurrected that program. Previous to coming to Northwood, Lindsey took the Woodlawn girls to the playoffs 9 of his 10 seasons while there.