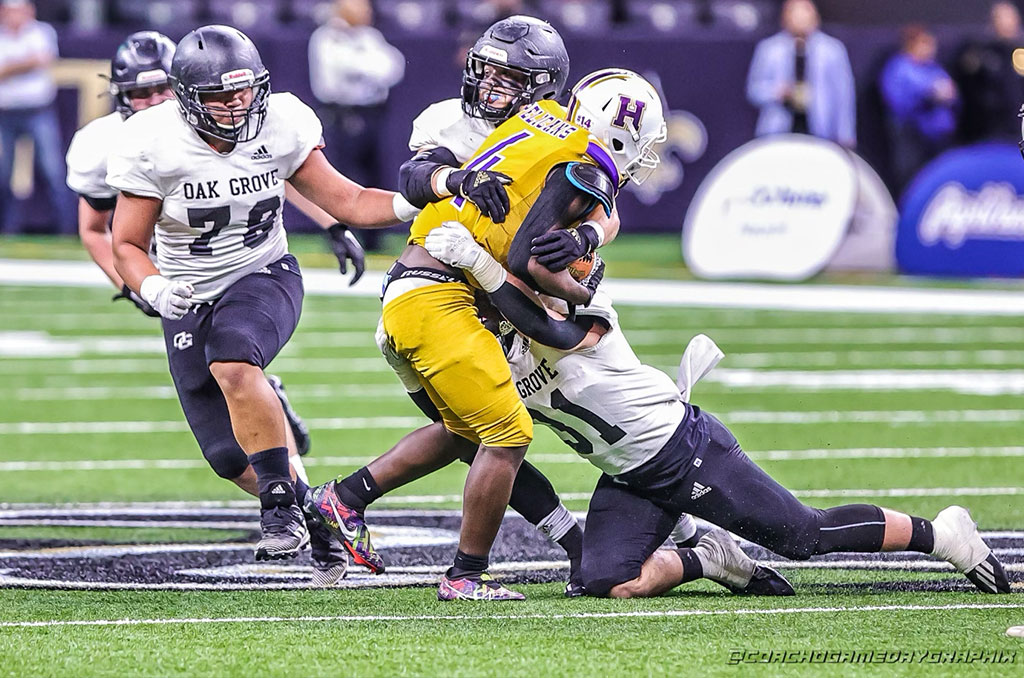 Decorian Freeman hit the corner on fourth down early Thursday and found another gear 25 yards up the sideline to the first points in Oak Grove’s shutout Division-IV nonselect state championship.

The senior tailback said he didn’t take long to think about having told his coaches three years earlier that he never intended to play football again — and, more importantly, coach Ryan Gregory’s convincing him to return to the team as a junior.

Freeman joined classmates like Oklahoma State commitment Kam Franklin in a 12-senior group listed on the Tigers’ roster to help bring a third title back to the program in four years with the 17-0 blanking of 2022 Class 1A winner Homer.

Gregory, himself an alumnus, said the outgoing 2023 graduates have placed themselves prominently in a proud tradition that includes seven state championships in all.

“You don’t get any more gratifying than that when you see your kids — I get emotional — and how much they’ve put in, the stuff they’ve been through,” the coach said. “It’s kind of hard to sum up into one moment. It’s so final when the game’s over with. But the whole journey, to me, they’ve put their stamp on Oak Grove history, which is a rich history, as in my opinion probably one of the best playoff runs in our history. For them to put that stamp on it just kind of puts it all together.”

Gregory pointed to the combination of his Tigers’ overcoming off-the-field adversity in illnesses and lost family members and level of postseason competition, including their past four opponents boasting a combined 40-8 record.

“I’m awfully proud of what we did when I was a player, but I’m more proud of what we do now,” Gregory said. “And that’s a fact that we’ve sustained it and are able to compete like this every year and these guys have that expectation. We were 3-3 coming out of the Haynesville game (in October) and there was no panic. There was just an understanding that we had to fix things.

“But that doesn’t just happen overnight. That’s because of these seniors and the way they lead.”

Franklin’s playmaking — even from a young age on the Tigers’ previous title runs — and college potential often make him the face of the class.

But Gregory pointed to the versatile standout’s development as a leader behind the scenes as being as critical and impressive.

“I’ve never seen anything like it,” the coach said. “You see kids get better talent-wise, but I’ve never seen anybody get better leading in the way he has in encouraging teammates and holding people accountable and going to pick up people that don’t have a ride or bringing them home, talking to the waterboys pregame. He’s just come full-circle. He’s got a great family, and that’s why he’s going to be successful.”