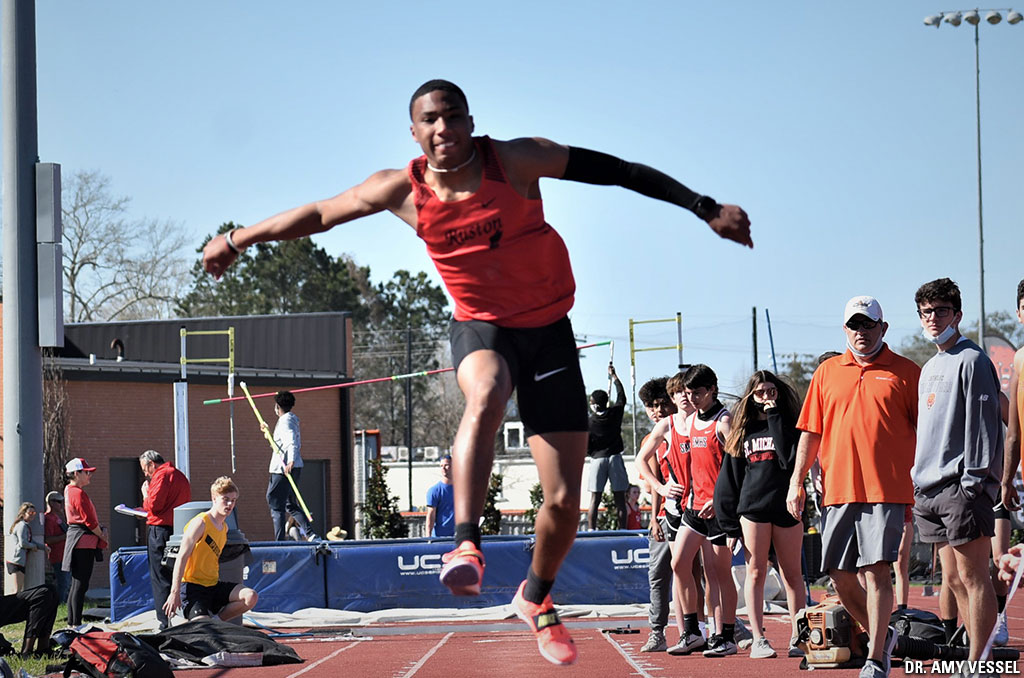 When it comes to the best triple jumpers in the history of North Louisiana high school track and field, Ruston junior Brandon Green may not be in a class all by himself–yet, but it certainly doesn’t take long to call the roll.

The two-time indoor state champion joined an elite group with a 50’3 effort on Saturday in his outdoor debut at Catholic High School.

At the head of the North Louisiana 50 Foot Club in the triple jump is former Captain Shreve Gator LaMark Carter, who had a high school best of 51’5.5. Fair Park’s Hollis Conway and Haynesville’s Don Robinson are the only other two members, both with efforts of 50’5, to do it during their senior year.

If you include meets after graduation, Evangel’s Richard Smith would be added to the list. Smith jumped 50’8 at the USATF Regional Junior Olympics in the July of 1998 after his graduation from ECA.

Two of the members of this prestigious club–Carter and Conway–went on to participate in the Olympics. Carter competed in the triple jump in Sydney, Australia in 2000. Conway medaled in the high jump in both the 1988 Olympics in Seoul, Korea, where he won the silver, and again in 1992 in Barcelona, Spain, where he won the bronze medal.

Last year, as a sophomore, Green collected his first state title in the triple jump  with a 45’5 and helped the Bearcats to a state championship before Covid shut down the outdoor season.

“I was looking forward to it,” Green said of the missed season. “However, it did give me time to prepare and work on my skills.”

Ruston coach Allen Whitaker said that Green is one of the smartest athletes that he has ever had the privilege to coach.

“You can tell him to make the slightest adjustment and he does it immediately,” Whitaker said.

Green’s coachability came in handy on Saturday when his steps were off due to the board being closer than normal to the pit. It almost caused Green to land in the pit on his second phase of his first jump.

Coach and athlete were able to work through the problem before Green soared out to the 50’3 effort on his fourth and final attempt.

“When I landed, I heard someone say ‘Yeah, he got it.” Green Said.

Green, still in the pit, looked back and could tell by his position in the sand that he had erased the previous Bearcat best in the event.

As far as who was more excited–the athlete or the coach–opinions vary.

“I would say it was equal,” Green said.

“A kid that is normally quiet,” Whitaker said, “jumped for joy and was very jubilant after the school record jump.”

Conway, who is now the director of Lafayette Parks and Recreation, had some advice for Green.

“First, I would tell him congratulations and welcome to the club!,” Conway said. “The next thing I would tell him is to continue to train like he is still jumping 40 feet, but dream big. I think the world record is around 60 feet. That is not out of the realm of possibility for him. Shoot for the stars!”

The Lady Bearcats got in on the record breaking action as well, lowering the mark in the 800 meter relay with a 1:40.50.

The Bearcats will travel to Shreveport on Saturday for Yellow Jacket Relays at Lee Hedges Stadium. The meet will be the biggest in Northwest Louisiana during the 2021 regular season. Field events and preliminaries will begin at 10am. The finals of the running events will begin at 2 p.m..