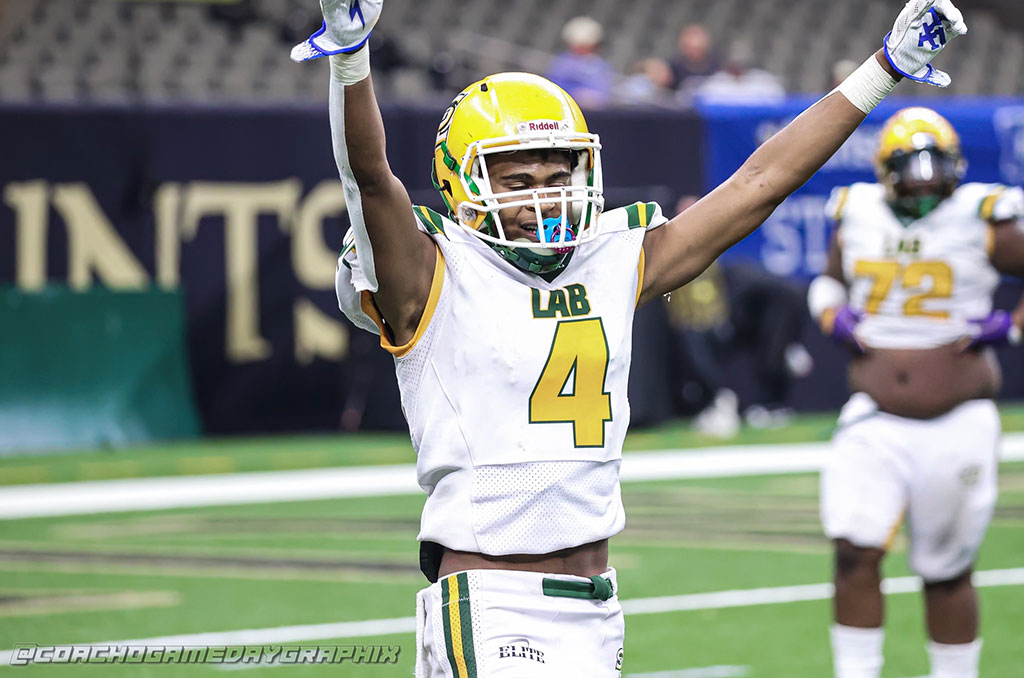 NEW ORLEANS – Southern Lab was more than determined in its first trip back inside the Caesars Superdome following a five year-hiatus.

The Kittens (11-2) were on a mission to avenge a loss in its last appearance in the state title game. They did not disappoint and took control early which proved to be the difference in taking down No. 1 seeded Ouachita Christian, 38-14, to claim the school’s fifth official state title.

In the first half, it was all Southern Lab as the Kittens controlled the majority of the action with over 15 minutes of possession. However, it was a string of penalties that negated several huge plays for the No. 2 seeded team out of Baton Rouge.

On the other hand, it was Ouachita Christian attempting to play catch up throughout the first two quarters. Following the first period, the Eagles had only two yards of total offense.

However, it was towards the end of the second quarter when OCS finally began to find its identity through the air. A pair of huge plays resulted in the Eagles cutting into the score to make it a one touchdown game heading into the half.

In the second half, Ouachita Christian continued to fight back but huge plays helped the Kittens sustain a lead that would help guide them to their first official state title victory since the 1996 season.

The loss dropped Ouachita Christian to 13-1 overall on the season. The Eagles have now advanced to the state finals for three consecutive seasons.

Angelo Izzard was voted Most Valuable Player for Southern Lab after accounting for five touchdowns, three through the air and two on the ground. The senior quarterback was 21-of-31 in the passing category along with 340 yards while having accounted for 63 yards rushing. Senior Darren Morris finished with 179 yards receiving and two touchdowns.

Thomas Culp, named Most Outstanding Player for Ouachita Christian, caught seven passes for 74 yards and a touchdown. His touchdown reception helped gain momentum for the Eagles as they cut the score to five just before halftime.

• 5:04 – SOUTHERN LAB| Angel Izzard finished a 13-play, 88-yard drive with a 4-yard keeper to put the first points on the board for the Division IV title game.

• 1:51 – OUACHITA CHRISTIAN | Ouachita Christian fought through adversity and finally found the endzone as Landon Graves connected with Thomas Culp on a 22-yard touchdown pass to cut the lead to a 12-7 score late in the first half.

• 7:24 – SOUTHERN LAB | The Kittens struck again on a drive down the field using explosive plays. However, it was Shawn Bates that raced into the endzone from nine yards out, untouched to give Southern Lab a bit more cushion. The two-point attempt failed.

• 3:51 – SOUTHERN LAB | Izzard tossed a beautiful 41-yard touchdown pass that found Morris on the duo’s second score of the game to help give Southern Lab a 19-point advantage following the two-point conversion.

• 1:49 – OUACHITA CHRISTIAN | The Eagles were able to sustain a drive down the field in order to give Graves an opportunity to cut into the Southern Lab lead as he rushed on a four-yard keeper.

• 4:17 – SOUTHERN LAB| The Kittens took advantage of an OCS interception and scored in six plays as Izzard kept the ball on a quarterback keeper that helped cushion the lead.

• 1:23 – SOUTHERN LAB| Southern Lab sealed the game by forcing yet another turnover and taking advantage as Izzard rushed for 18 yards for his fifth touchdown of the game.