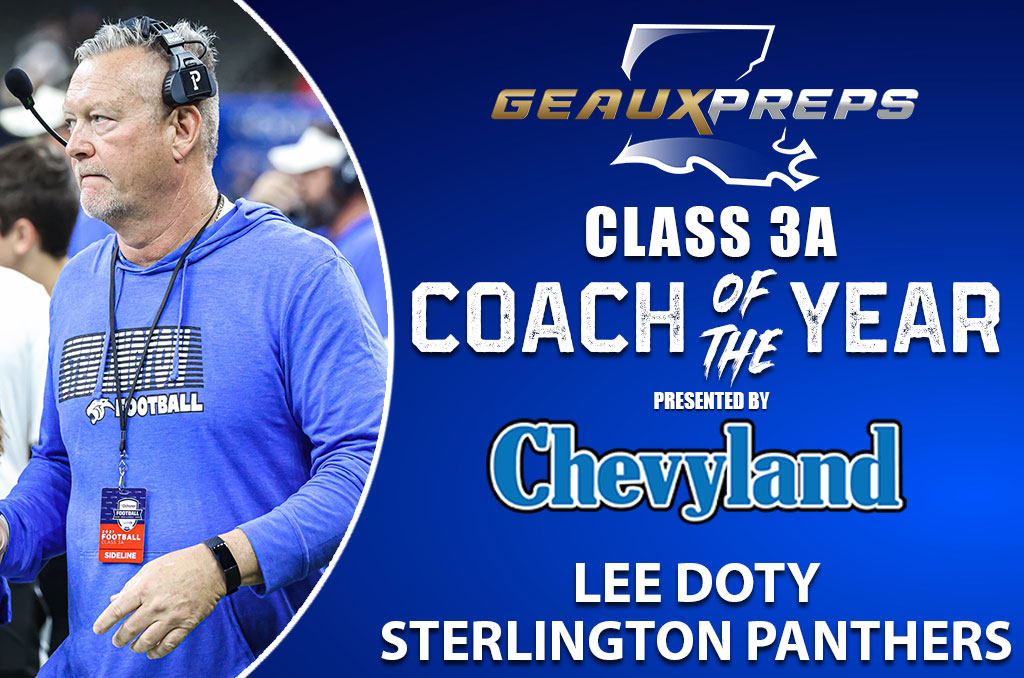 LAKE CHARLES – Louisiana’s third largest football classification showcased some of the best prep squads to step onto the gridiron during the 2021 season.

The Sterlington Panthers were the cream of the crop and steadily rose to the top with one of the most dominating campaigns culminating with a 15-0 undefeated season as well as the school’s second state championship victory.

Head coach Lee Doty was at the forefront of the campaign where he led the Panthers to regular season victories over promising programs such as Oak Grove, Mangham and Union Parish to earn the top seed in the Class 3A playoffs.

For his efforts in helping to guide Sterlington to its first perfect season as well as a state title, head coach Lee Doty has been named the GeauxPreps.com Coach of the Year Presented By Chevyland for Class 3A.

In the postseason, Sterlington rolled through to the second round where a long road trip to Westlake did not phase the northeast Louisiana squad, setting up a quarterfinal round date with defending champion Madison Prep.

A thrilling last second victory over the Chargers provided a new challenge in taking on Church Point, whose defense had allowed just 20 points in the regular season. However, the explosive Sterlington offense was no match and the Panthers shut out the Bears, 38-0, setting up a district rematch with Union Parish for the Class 3A State Championship.

It was a slobberknocker for the ages as both squads traded blows but it was the determination and coaching leadership from Doty and his staff that helped Sterlington prevail past the district rival for a second time, this time for a bigger championship trophy.

The state championship victory was Doty’s first official title as a Louisiana head football coach, leading the Panthers to their first title since 2016.