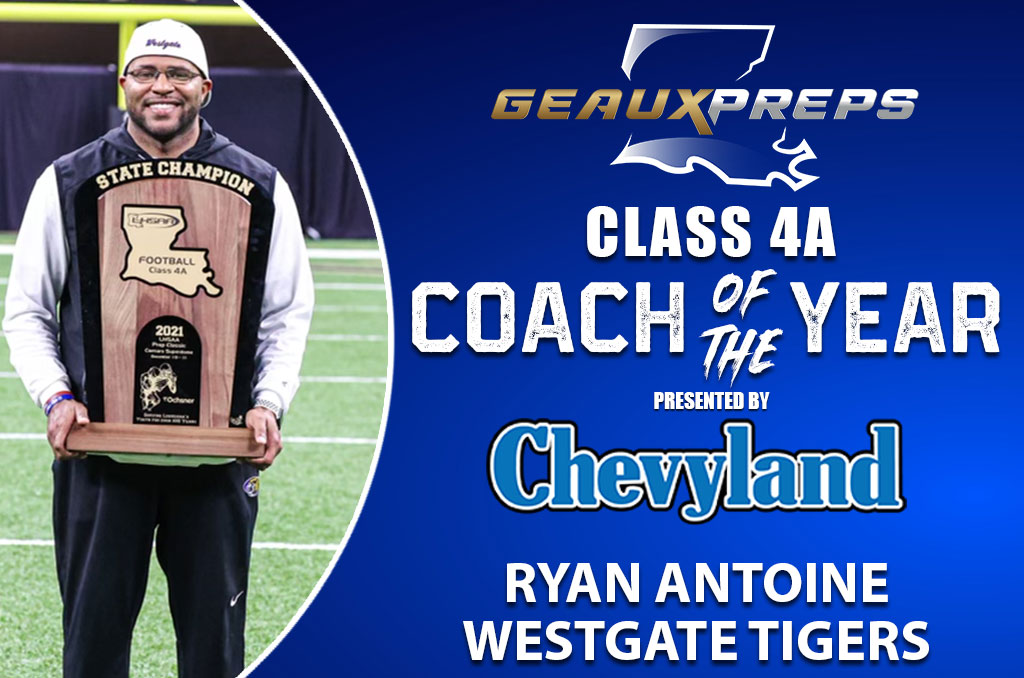 LAKE CHARLES – Ryan Antoine did the unthinkable. He reached the unreachable. He slew the giants.

The long road towards building a program into a championship team finally paid off leading Antoine to be named the GeauxPreps.com Coach of the Year Presented By Chevyland for Class 4A.

Since 2012, Antoine has been tasked with building Westgate into a championship football program. It wasn’t easy as the Tigers competed in one of the toughest districts in the state that included the likes of St. Thomas More and Carencro.

The veteran coach never made excuses as to why his team couldn’t or how difficult the schedule was. His team went to work each day and eventually, that work paid off.

Westgate entered the 2021 season with a chance to advance deep into the playoffs with the Tigers returning most of its starters from a promising season prior. However, the obstacle course would be difficult.

The road battles strengthened the Tigers’ will to achieve the ultimate goal. The showdowns with some of the best in Louisiana football increased Antoine and his squad’s confidence that it was their time.

Victories over St. Thomas More and Carencro, both defending champions from last season, propelled Westgate towards the top of the district and into a respectable fifth seed.

In the playoffs, the Tigers battled their way through the first three rounds to set up a semifinal contest against the mighty Edna Karr Cougars in New Orleans. With no one giving them a chance, Antoine and company walked into Behrman Stadium and took down Karr, 27-20, to not only advance to the Class 4A State Championship but to play for history.

Westgate had enjoyed playoff success but not at this level. It did not phase the state title newcomer.

A showdown with Warren Easton in the Superdome awaited the Tigers. Most teams would be intimidated. Westgate took full opportunity to prove it deserved to be there.

The Tigers withstood four goalline attempts in the closing seconds of the Class 4A title game to hold off the Eagles, 14-13, to capture the school’s first championship.

For Antoine, the moment was surreal. He led his team to its first state title after taking down some of the most talented squads around the state.