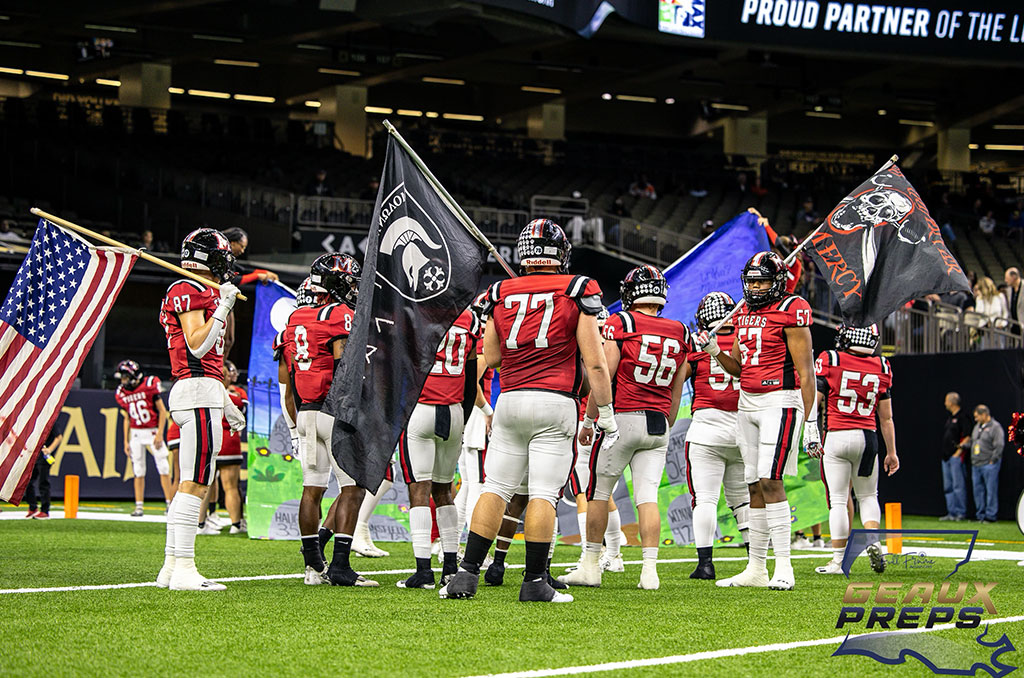 The spotlight entering the Division-III nonselect state championship focused heavily on a pair of Louisiana’s brightest high school stars in their final games.

And Many’s Tackett Curtis and Union Parish’s Trey Holly quickly made good on big expectations with back-to-back long touchdowns of 80 and 63 yards, respectively, within a 20-second span in the first quarter.

The USC- and LSU-bound standouts went on to earn their teams’ respective Outstanding Player honors.

But as Curtis and the Tigers showed their greater depth and pulled away for the 35-13 victory, the matchup proved as much an opportunity to pass the torch as to the next generation.

“I’m just proud of my boys,” said coach Jess Curtis, Tackett’s uncle. “Such a special team that’s really a collection of a great senior class, a huge junior class, a bunch of talent, and they just choose to come to work every day.”

Tackett, playing quarterback on offense, and running back Trenton Williams each scored first-half touchdowns to provide Many a 13-7 advantage at the midway mark.

That senior duo finished with 99 yards and 102 yards, respectively, with Tackett also adding a second touchdown early in the fourth quarter to help stretch the lead.

But several members of that huge junior class stepped up as difference-makers throughout the contest as well.

“I feel like everybody was just doing a great job and everybody was doing their job,” Tackett Curtis said. “Nobody had to do anything special. It was kind of nice to see, when everybody works as hard as we do, that it pays off.”

Defensive back Tylen Singleton, the highest-profile recruit of the Tigers’ 2024 class, provided two of the game’s biggest plays on defense.

The LSU, TCU, Notre Dame and Oregon target led the team with seven tackles, including a first-half chase-down of Holly to save a touchdown and a third-quarter strip-and-recovery behind the line to help blow the game open.

“I was on the edge, and the cornerback was giving him a little bit too much leverage right there,” Singleton said of the latter. “And as soon as he caught it, he didn’t see me coming. It was just a blind shot right there, and he fumbled. And it was just amazing after I got it.”

James went on to a game-high 140 yards and two second-half touchdowns, as well as a 9-yard catch, in a breakout performance on the big stage.

“We knew what he was all along,” Jess Curtis said. “He was a starter for us last year opposite of London Williams. He’s been that guy. He got picked up a little bit earlier in the season, but he came out tonight really to kind of show himself to the whole state of Louisiana.”

Said James: “It felt great to be coming out like that and know I had my team on my back.”

Jess Curtis assured that the Tigers would indeed celebrate and enjoy their second state championship in three years and third overall.

But, with so much returning talent already stepping into the forefront, he and his players were already starting to peek ahead to their next pursuit even before leaving the Caesars Superdome.

“We’re gonna put the trophy in the trophy case and try to defend it,” the coach said. “You know, we’ve done great about getting back after we’ve won it, but what about going back-to-back?

“You start talking about that. I’m floating it out there to them. But that’s the thing: You wanna push the envelope forward. You never rest. You never stay the same. You’re either getting better or getting worse. So we’re gonna take that mantra into the offseason and try to go win another one.”