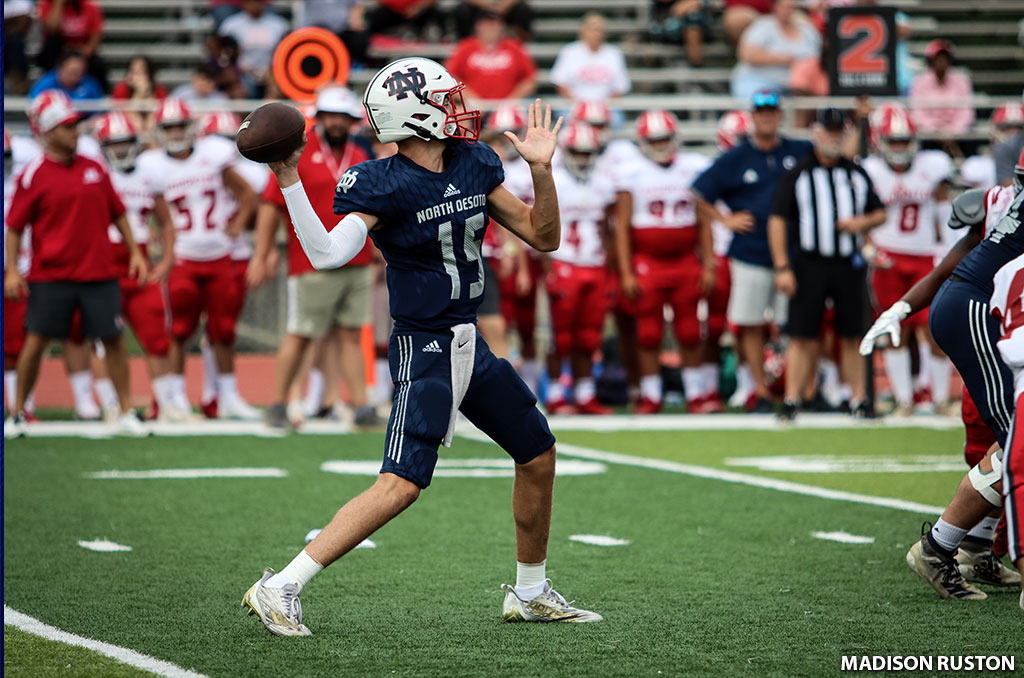 After a long hot summer, it’s almost time for the Friday night lights to shine again in Stonewall. But first, a scrimmage was held against Haughton to see what last-minute details needed to be cleaned up before the season opener in two weeks.

A lot of familiar faces are on the field for the Griffins, with a large senior class returning, but there is one new face stepping on the field for the first time. Freshman quarterback Luke Delafield seemed more like a timely veteran than a freshman rookie Friday night as he put up big numbers in the team’s first live action of the fall.

Delafield accounted for six of the Griffin’s touchdowns on the evening along with 23 completions for 434 yards.

“He’s young, but when the ball is put down he plays like a veteran”, North DeSoto head coach Dennis Dunn said.

Senior wide receiver Sam Odom added, “He seems ready. He’s a freshman, but he’s playing like a senior. He’s going to have a big year for us.”

A lot of pressure comes with stepping into the quarterback role, especially for a freshman, but Delafield seems ready for it all.

The scrimmage was set up where each team received 12 minutes of play, followed by the second team getting eight minutes, and then a live quarter of action to end it out. Special teams got reps in between the ones and twos.

The defense went first for North DeSoto. Haughton was able to score on their first drive, but after that, the Griffin defense shut it all down. Big plays came from sacks by senior Daniel Oliver and junior Lincoln Hooper. The defense also got an interception from junior Lake Bates.

The moment everyone was waiting for came in the first offensive series as Delafield got a taste of his first real high school action and he would not disappoint. On the first drive, it took only two plays for the Griffins to find the endzone. Senior running back John Lewis, who missed all of last season with a torn ACL, found a hole and took it 60 yards to the endzone. On the next drive, Delafield finally got to air it out. He completed passes to sophomore Cole Cory and senior Sam Odom, before he connected with senior Landon Falls in the endzone. The next drive, the senior running back duo of John Lewis and Brian Banks did most of the work before Delafield connected with Falls again in the endzone. Delafield’s first action in high school was successful. Three drives, three touchdowns.

It was Haughton’s turn once again to take snaps but the Griffins continued to make big stops. There were several big hits from seniors Hunter Addison, Gator Hampton, and Jordan Milton. The defense didn’t allow any touchdowns in the series.

Delafield’s production didn’t slow down at all as he threw three more touchdowns with connections to Cole Cory, Landon Falls, and junior Corbyn Cross. The productive series gave Delafield and Falls three touchdowns, showing the coaching staff that there might be a unique chemistry between the two.

In the scrimmage’s final period, the live quarter, North DeSoto kicked off to Haughton to begin. The Griffins were able to pin the visitor deep and the defense was able to bring up a fourth down, forcing the Buccaneers to punt from their own endzone.

North DeSoto’s Lincoln Hooper was able to get a hand on the punt helping the Griffins to recover inside the 10-yard line by Drake Wadsworth. It didn’t take long for the offense to answer as Brian Banks ran it in for paydirt on the first play. On the next defensive drive, Haughton was able to get some momentum going, but ultimately the Griffin defense came up with a big stop via a turnover on downs

On a short drive that ended with Delafield connecting with Cory, the Griffins scored their second score of the period that would hold until the final second ran off.

The Griffins will take to the film room to learn from Thursday’s performance in preparation for Jamboree week next Friday as the Griffins take on Logansport and Mansfield. North DeSoto opens the regular season at home against Airline on September 1.